I’m not sure about the last part; I prefer tweaking, not reinventing myself, but I do enjoy making a renewed effort at the beginning of each week and month to make that week/month ‘better’ in various ways. And, it just so happens that this month, June, has started on a Monday… which means twice the… whatever this is, unless of course you start your week on a Sunday, in which case you have to wait until October for such a week/month, thing.

Last week’s challenge for me was to use less electricity (I employ a similar focus with water usage). I set myself an allowance for each week of the summer months (April-October) and I’d consistently been over. I had hoped that camping in the garden would help, but the video editing that had resulted from that made it otherwise (my computer being the most power-hungry device in my house). Well, after some effort each day, I finally got my week’s usage under my target. I might blog about this more in a future post. Now the challenge is to maintain this approach! 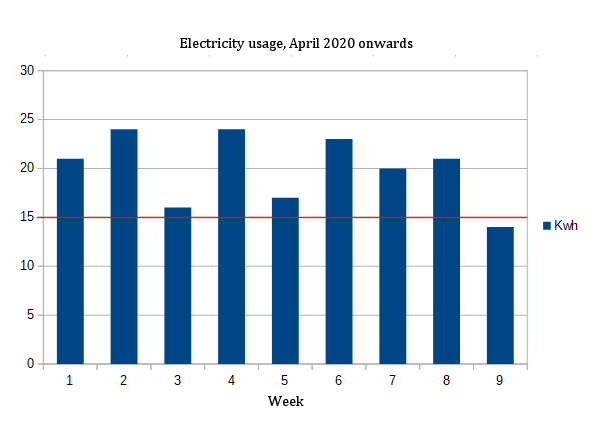 Riding my bike most days is normal for me; it takes little effort, it’s just a routine (more on that in a moment). But what I’ve always struggled with is increasing my average speed. There seem to be too many variables at play that make any progress unobservable, and experiencing some progress is likely important. Particularly, my average speed seems mostly affected by the weather (it can get windy here), how much stuff I’m carrying (either for work, grocery supplies, or both), and what hills I encounter (there are hills here also). How far I ride in any one go will make a difference too; on a longer ride I will automatically take it easier, even if I try to encourage myself not to. Different things affect my energy levels; food, sleep, stress, to name a few.

That being said, my average speed for May saw me match my previous best month… from 2008, which was then achieved on a lighter bike. The strange thing is, the previous months of this year have been nothing of note, so I’m not sure where my personal best came from in May; perhaps the weather has been right for it, perhaps fewer longer rides, perhaps less big shopping trips, perhaps less work and less stress have all played a part. Regardless, I hope continued effort will be as fruitful.

This is an area where one’s routine can noticeably pay off; making the effort, dedicating some time each day to reading means I see myself churn through another book. May had me re-read The Only Planet of Choice (TOPoC), and I feel like I have taken on board a fair amount from that, even if the advice largely comes from an ‘alien’ being called Tom. Next up is Hyperspace by Michio Kaku, another book I have already read. It has already had my head filled with thoughts of parallel worlds and how light operates in the 5th dimension. I even had another dream featuring an Einstein-Rosen bridge, this time made out a long slice of bread, rather than a pop-tart…

The continuing challenge I face with books is dedicating time to following up what I read. I generally write notes as I go, and in the case of TOPoC I recorded those also, but it amounted to over two-hours-worth of talking, and a not very clear recording. I may upload that at some point, but for now it is filed away.

Daily I ponder the dreams I can recall from the night before, trying to understand recurring themes and what I might need to overcome in my waking life to resolve these. I also have a shuffle through my Lenormand cards to see which ones present themselves, providing a little direction for my focus for that day; perhaps this is random, perhaps it is guided by some other-worldly-force, I don’t know, but it seems helpful and is fun.

Now for June… I hope you all have a good one!