At the weekend I read a fellow bloggers blog post about the Mandela Effect and coincidences in our lives. In particular Morgan wrote about the Titanic and that the novel ‘The Wreck of the Titan’ which is about a fictional British ocean liner which crashes into an iceberg in the North Atlantic and sinks, was published 14 years before the sinking of the Titanic. I’d heard of this before, but not really thought much of it.

Then, the next day I visit a client to help with their email issue. After I get done sorting out the problems they fill me in on the reason they needed to get back into their email account asap; they’re working on a project related to the Titanic! Apparently a local person was on that ship for its maiden voyage and now a ‘commemorative thing’ is being arranged pertaining to this.

Then, as I’m glancing around the room I’m in, my eyes catch onto the design on the sofa cushions: 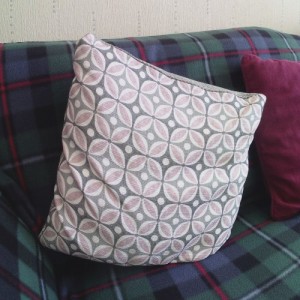 A simple but attractive geometric pattern which I’m sure the owners only chose for this reason. I’ve been in this room numerous times over the years but only now noticed this pattern here; perhaps they’re different cushions.

The design is familiar to me because it looks similar (to me) of those common among topics of things like ‘Earth energies’ which could encompass things like synchronicities.

Returning to the weekend and I had been looking up on Youtube channels of common interest to mine of late. Then fast forward to Monday evening (after the Titanic coincidence) and I’m looking up a song by Green Day, ‘Know Your Enemy’ to play along to, except I either accidentally mistype it or Youtube did its whole ‘guessing what I’m typing’ thing and searches instead for “Know Your Energy“. In the list of search results is a video by one of the Youtubers I had ‘rediscovered’ the previous day. The thumbnail features that geometric pattern:

Skipping back now to the whole Titanic thing, it got me thinking about how we still make a ‘big deal’ out of the sinking of that ship and of the people that died on that ‘fateful’ occasion. That happened way back in 1912. The ship was carrying 2,224 passengers and crew and of those 1,516 are said to have died.

Why does this story still resonate?

Is it the image in one’s mind of the ‘unsinkable’ ship colliding with the iceberg on its maiden voyage? Is it the class division, portrayed in the movie, of how there weren’t enough lifeboats?

That so many people died in one occasion is one thing but to put this into some sort of heart-less perspective, just five years later over 1,900 people died in the ‘Mont-Blanc and the Halifax Explosion’. In the 1950s, the passenger ship Kiangya.

…packed beyond its capacity limit with refugees fleeing the People’s Liberation Army, blew up and sank in the mouth of the Huangpu River 50 mi (80 km) south of Shanghai on 4 December 1948. The suspected cause of the explosion was Kiangya hitting a mine left behind by the Imperial Japanese Navy in World War II. The exact death toll is unknown, however, it is thought that between 2,750 and 3,920 died with 700–1,000 survivors being picked up by other vessels. – Wikipedia

Even more recently, the Doña Paz ferry bound for Manila with more than its capacity [a familiar story] of unlisted passengers collided with the oil tanker MT Vector in the Tablas Strait, near Marinduque. The resulting fire and sinking left an estimated 4,386 dead. Yet who has heard of the Doña Paz?

Our current situation finds the US with over 2,000 deaths per day, yet heart disease is said to kill an average of 1,775 per day, and that’s been going on for far longer, yet receives barely a mention in weekly news [image source].

What causes these biases of attention? Why is one thing given more media attention than something more significant where overall deaths are concerned?

As a final comparison, I noticed there was a difference between those two patterns above. The ‘Titanic’ one contains 4 segments (‘Titanic’ coincidentally = 4 in numerology) and the ‘energy grid one’ contains 6/12.