I’ve had an interest in UFOs since whatever age in my childhood, perhaps since watching the movie Independence Day on TV, or from watching The X-Files. Since then I’ve read books about alien abductions, considered that some of the Bible’s stories are about a visiting “God”, and I even had some content published in a UFO magazine back in the day. That wasn’t about flying saucers though; I’ve never seen one, or been abducted (to the best of my knowledge). I once did see a bright glowing orb through some trees as I cycled home from work one night back where I used to live, but I’m pretty sure it was just a spotlight on a distant farm building.

I was recently watching the Good Omens series on Amazon Prime, as I had a month’s free trial to make use of. It is based on the book by Terry Pratchett and Neil Gaiman. The soon-to-be evil demon child reminded me of myself when he took an interest in various topics the resident witch presented to him; things that I myself had been interested in at that age; UFOs, Area 51, the Loch Ness Monster, nuclear power stations… I’d probably have been interested in the witch too!

Then last week I took another jaunt up Snowdon, not to the top on this occasion but up to the layer of cloud that shrouded it; I hadn’t the time to go all the way as I was just filling my spare time between clients. I’d got my slightly better camera with me and was keen to take some better pictures and fortunately that cloud layer was a little higher up than it had been on my first climb.

When I got home and was taking a closer look at the pictures I had taken, one had a curious feature that I had not noticed at the time of taking it. Here is that picture: 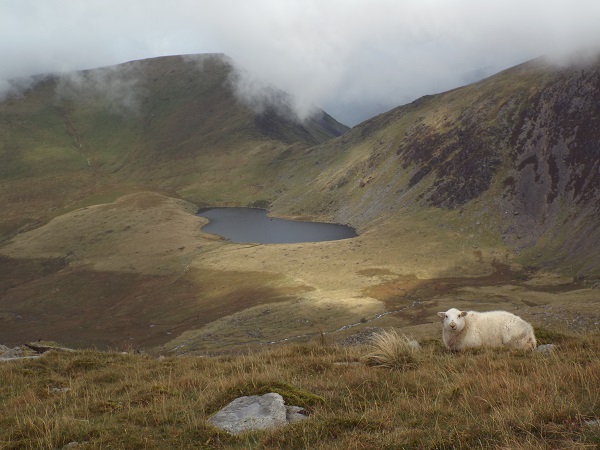 And here is what I noticed: 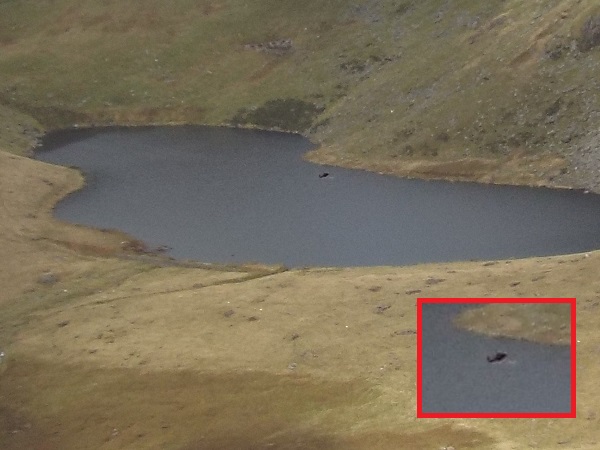 My mind immediately imagined it looked like a helicopter that was flying upwards from down near the lake’s surface, but I hadn’t noticed it at the time and it didn’t appear in any other frames. Also, I wasn’t sure about the scale, since there was little in the way of reference points, indeed I was noticing that trying to capture the scale of things in the area, like cliff edges, was quite tricky. Perhaps this was some alien craft or secret government technology that has a base of operations hidden within the lake and I’d only caught it in the moment before it was able to cloak and fly off.

The truth of the matter is that I had been trying to get the light levels right in my camera, since the passing clouds were affecting that constantly; that and the sheep had a tendency to look in different directions. It just so happened that a pair of rooks took flight in the wind and I quickly raised my camera to try and capture them in that moment, for that’s all it was. With so much going on, with the sheep looking around and the clouds passing I virtually missed the birds, but that ‘UFO’ is one of them, them, the other, where the first one set off from is to the left on a rock in that first photo; flapping birds in flight often appear as strange shapes like this.

I’ve had a more recent ‘UFO’ encounter than this though. Last night, just after I’d crawled into bed following yet another walk up Snowdon (more on this in a future post I’m sure), I saw a group of bright orange-red glowing orbs stream pass my skylight window. They were brighter than any aircraft lights that I see flying over, and there was no sound; for a moment I thought they were fireworks, but no. I leapt out of bed to watch the spectacle that was over way too soon; I rushed downstairs to grab my camera but I’d left the batteries out of it following my earlier trip and it took me far too long to return with it; there was no sign of the orbs over the other side of my house where they had been heading.

[I might insert an “artist’s impression” here at some point.]

There was only one thing they could be though, I was certain; satellites, namely a particular Elon Musk-created set of satellites known as Starlink. I got on my computer for confirmation and to see if more would be heading my way.

The flightpath was right over Anglesey (the circled dots being the ones I had seen pass over), and had the skies not filled with cloud immediately following the initial sighting I may have seen more, although their illumination and particular brightness on this occasion was due to the time for it was the sun that had set below the horizon which had reflected off them I believe. I’ve done my fair-share of ISS-spotting to be familiar with how the illumination of satellites fades as they pass across the sky. The path of these things changes, or rather, what lies beneath the path moves, and it just so happened that I was beneath the path on this night.

Elon has been in somewhat denial and defensive about how bright his satellites are, and will be, as they will apparently get dimmer as they are moved into a higher orbit; I have heard criticisms from the world of astronomy for the problems these bright lights in the night sky are causing [link].

It’s worth keeping an eye on the tracking site I found to see when these satellites might be passing over your area, as I think they are certainly worth a look:

You can find out more here: