From DeviantArt, Redbubble vs. Society6

I’ve had photographs and other creations on DeviantArt for a number of years but I was recently thinking about selling prints, in the form of mugs and notebooks. While DA have the facility of prints, those sections of their website seem particularly dated and limited, for one thing there is no preview of what a print will look like in a particular format which isn’t helpful to anyone.

Having already noticed someone else I know of using Redbubble I headed on over there and signed up and began uploading artwork and editing my profile.

And then this happened:

I e-mailed them, and waited the 4 days; nothing. I contacted them via Twitter; nothing, and finally after I posted a @Redbubble tweet I finally got a reply (via e-mail and my Twitter message) and my account was back up and running. This did take a week though even though they promise a response within 4 days on their website. Had I been a long-term user facing a sudden drop in sales I would have been bouncing off the walls.

In the meantime I had done some further research (although I had done some review-reading beforehand), and found many others who had had their accounts deleted/suspended without warning; these were people who had been using the service for some time and been making sales. I’m not sure what went wrong in their cases but in mine it seemed Redbubble’s overly sensitive security systems had flagged up my profile edits as something dodgy, perhaps it was when I tried to include my tinyurl.com/bmhonline URL. I thought perhaps I would never regain access to my new Redbubble account so I looked elsewhere and set up one with Society6, although I had considered that I could try again with Redbubble, albeit with a different user name (something I wasn’t keen on doing).

One curiosity about the sign-up process, or rather the step you need to take in order to start selling on either service is the need to link to PayPal. Redbubble simply links to your PayPal account and is able to verify things in this way, whereas Society6 insist they need to make a $1 transaction… aka, charge you $1 to verify things. Since Redbubble need to make no such charge I wonder if this is a) more of a deterrent against people signing up willy nilly, without any serious intent, and/or 2) of all the accounts created which perhaps see no sales, at least Society get to charge that $1 fee to each, all in the name of anti-money laundering.

Anyway, since I have now had the opportunity to upload artwork to both Redbubble and Society6 from the standpoint of being new to both at the same time, I figured this was a prime opportunity for me to compare the two. I will put the Redbubble sign-up issues to one side and move on.

Overall I find Redbubble’s setup to be more polished overall and easier to use although it certainly has its quirks and sends me round in circles trying to figure things out. For some reason when uploading artwork to Society6 the page would seem to show the upload was processing only to then fail to proceed. Even though these were quite large uploads Redbubble uploads went smoothly. Keying in artwork details such as title, tags and description were very “laggy” on Society6 and I had to type slowly and carefully to ensure it didn’t miss letters. Again, no such problem on Redbubble where you can also start filling in the details whilst waiting for your artwork to upload.

Then onto the process of selecting what prints I wanted to make available.

Redbubble provide the ability to position artwork vertically or horizontally, which is very useful. Say I want to only move an image up slightly, no doubt I will have moved it slightly to the side, and perhaps slightly out of the printable area. By then clicking to centre it horizontally I can ensure all is well. Society6 don’t have this simple option so I would feel the need to zoom the artwork in slightly to ensure there isn’t a blank area left.

Where I do prefer Society6 though is how they preview your artwork on the item since when you click on the item you get shown the print layout, whereas on Redbubble you have to look above the editing area which seems awkward and counter-intuitive. Society6 provide more options for printing on phone and tablet cases and the previewing tools here work great. What is annoying about Society6 though is, you work your way down the page choosing the items you want to sell, and after editing each one it dumps you back at the top of the page; you then have to scroll back down, remembering where it was you got to.

I much prefer my profile on Society6 as it includes my artwork in various formats for the world to see. 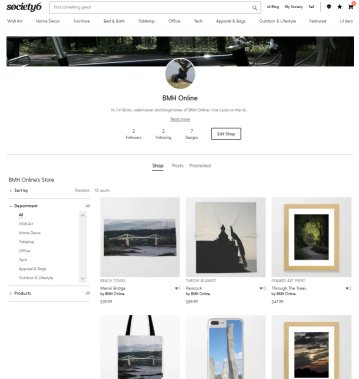 Redbubble on the other hand simply shows my “Recently added” artwork as ’tiles’, and not as an enticing mug or notebook. For this you have to click through to the Shop.

Regarding what kind of prints each service has to offer, they both have a large array of things, and some things they both do, like regular prints, mugs, t-shirts, notebooks etc. There are also some odd things I personally wouldn’t consider such as tables and duvet covers. Actually on point about notebooks, Redbubble have spiral-bound notebooks while Society6 do not. Redbubble can do postcards but I found them to be somewhat finicky (in landscape format at least they must be 4:3 otherwise they end up with a border) and you have to go right out of the editing area and into viewing the actual item as a postcard to find out.

I’m sure there will be many quirks such as these and ways to compare items from each service so it depends what you’re interested in selling. It seems all to easy to just select every option and hope for the best, whereas I’m thinking it’s probably better to really focus on what you want a particular upload to be; a mug, a vest, a clock, or a yoga mat for example, and go from there.

Price-wise, it’s difficult to determine which service will provide the final customer with the best value for money. Redbubble are far more up front with their pricing because Society6 require you to fill in your shipping details before they will calculate postage; something I never like. There are also some good discounts to be had, so if you want to design your own set of mugs for example for your own use you can do this. Or if you want to sell greetings cards in a local shop you can order them in bulk. Redbubble will encourage you to add X more to your Cart in order to give you a discount. I quite like this. I even compared prices with other print-on-demand services, and of the things I looked at, such as mugs, prices were comparable and certainly not worth me getting printing done myself.

There are a few things either these services don’t provide or I could print myself for less, such as mouse pads and individual postcards.

Returning finally to DeviantArt, here I always felt there was somewhat of a community to be experienced, and if it’s just somewhere to upload your artwork to rather than print sales, then DA seems best. Redbubble or Society6 have the potential to do well for you if you link to them from other platforms, such as a website or blog, and promote sales in this way… that is unless your artwork is super awesome it sells itself.

If you would like to checkout my Redbubble and Society6 profiles you can do so here: