Since it was World Carfree Day on Saturday and I’d been invited to an art do in Bethesda, some 30 miles away, off the Isle of Anglesey and into Wales proper, I had my day planned out for me. Since it was my mum inviting me I did have a niggling feeling that I’d get there and discover it had been cancelled or moved, but that didn’t happen. 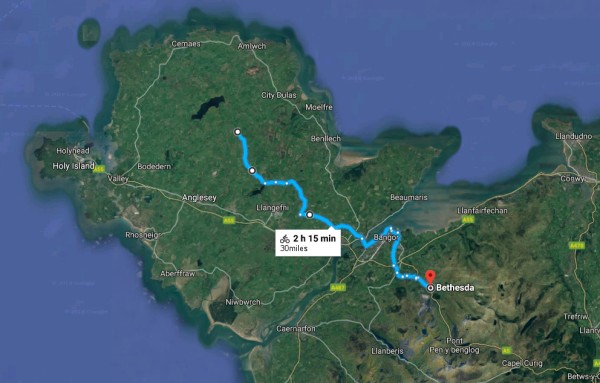 The day was a grey one, but rain wasn’t forecast until the afternoon, so with a little motivational pep-talk, because I was honestly feeling like I couldn’t be bothered, I set off. I do quite like venturing off Anglesey because it doesn’t happen all that often and there is a nice change in scenery; first through different hills and trees, before being close and among some of the mountains of Snowdonia.

I would have created a video of the trip (I did have my camera recording) but the weather was really quite gloomy and nothing exciting seemed to happen. I glimpsed at the hills that blessed my views, but that was it. Some clips from the trip may appear in a future video.

The journey back was much the same; grey, although as is often the case, seemed to be over much quicker (I find it strange how that happens). 60-miles done I keenly devoured a big meal upon my return home and a little while later I was feeling a lot happier about the day and pleased with myself for getting out on my bike for the day.

The only thing that was disappointing about the day was that the next was a much brighter and sunny day!

Two days later, after the event, a topic on BBC2’s Jeremy Vine show is about how a school maybe losing one of its bus services in exchange for an improved footpath… parents are objecting to their children having to walk to school. One caller to the show reeled of a list of reasons, basically all the things supposedly wrong with the route, namely on safety grounds, 95% of which I could have attributed to the 3 mile route I used to cycle to school; no street lights, 60mph traffic, no footpaths, the weather, the hills… I really think all the parents need to get on board with the changes and make the changes do-able and wonderful. The route will become safer once drivers become familiar with the fact that there are a lot of people walking/cycling on it.

I don’t for one minute regret cycling to school (in all weathers), although I do wonder how much energy I would have had to put into my studies if I hadn’t expelled it through my bike’s pedals, then again I’m sure the fresh(ish) air and exercise did me wonders (likely giving me more energy, not leaving me with less) and I’m still cycling virtually every day to this day. I’m glad I wasn’t stuffed in a bus and had that become my daily routine. People dragging their heels about what will be a healthy change winds me up!