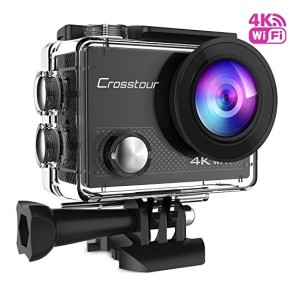 I’m in the process of putting together some videos for Youtube created with an Action Camera that I wear on a chest harness when out cycling.

Throughout this I’m discovering and overcoming various hurdles which, when seems ideal, I will document them here on my blog.

The Action Camera I’m using is a Crosstour 4K. It’s basically a cheap version of a GoPro and from my understanding the key feature it lacks is built-in image stabilisation. From recording my first shots whilst out cycling, and then playing them back on my computer, I immediately see that image stabilisation is needed to smooth out the shots.

Image stabilisation is a feature that is included in Microsoft Movie Maker (freely available for Windows), however I had intended not to use Movie Maker for these videos as I had done for others because I wanted something with more modern features; for one thing it was limited to outputting video at a maximum of 1080p whereas Youtube caters for 4K content. I also wanted something that was not only available for Windows but Linux too.

An immediate search for a method of stabilising videos wasn’t very helpful or the method presented was too long-winded.

The process to stabilise a shot in Movie Maker is pretty straightforward:

*There are two other Stabilisation options but I found this one to be best.

**1080 is the highest resolution output option; I would prefer higher to give me more headroom for importing the stabilised clip into my Video Editing software of choice, in a similar fashion to how I would prefer to work with higher resolution photographs.

My Video Editing software of choice…

I tried a few and OpenShot looked promising at first, but I only got as far as creating a title sequence before it ground to a halt, being laggy and sluggish between trying or undoing options and finally outputting a video that didn’t match how I had trimmed it in the software. Disappointing. It was better in Linux than Windows, but would still freeze regularly before proceeding. I looked online for a solution and the common explanation was “your computer isn’t good enough” which didn’t reflect what I was seeing; the software was fundamentally flawed – it has been for a while according the experiences I was reading – and so I moved on.

I now found another list of recommended Video Editing softwares and after trying these I settled on DaVinci Resolve 15.

DaVinci Resolve 15 immediately looked to be far more complex (or complicated!) than Movie Maker, but it turned out this also included an Stabilization option (actually two). I found the instructions [here] and followed them and outputted a clip to compare with my previous Movie Maker-Stabilised one.

Sadly the results weren’t good. They might work well for hand-held shots that need smoothing out (such as the example I witnessed in the instructions I found), but not for the shaky shots recorded by my Crosstour Action Camera attached to my chest harness (which is supposedly a better option than attaching the camera to the handlebars).

Mainly DaVinci Resolve would crop the clip far more heavily than Movie Maker, and the final output (at the same resolution) was slightly but noticeably washed out/pale when compared side-by-side. The process also took longer also in both rendering time and jumping through the necessary hoops.

By default that process will use the latest GPU Accelerated method, whereas by going to those […] three dots in the Tracker window you can switch to the Classic Stabilizer, seemingly giving further control, which I also followed instructions for but this wouldn’t work for me – the video would do weird things like zooming out over its duration or even turn upside-down – so I left that alone and gave up.

I have decided to stick with Movie Maker to Stabilise my shots, at least for the time being; perhaps someone can provide me with some further assistance.

[EDIT] Movie Maker isn’t without its glitches; the next set of video clips I stabilised (after creating this post) failed to Save and instead through up errors pertaining to seemingly now missing or corrupt clips. I tried to take out and put back the problematic clips but this resulted in the same. I had to Quit and start again.