These To Do lists have developed over the years, and January’s ready-and-waiting list looks something like this: 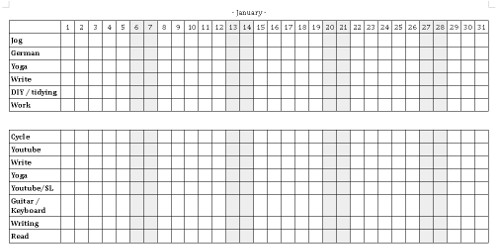 If you like the look of that and didn’t read my previous post that introduced it, and you want to find out more, then I would recommend heading over to read about it now [click here].

If you’ve followed the progress of my To Do lists this far and feel that my approach, or some parts of it, could work for you, then what follows are some other bits of advice.

The simplest way to live would probably not involve any such things as To Do lists, but for me, and perhaps you, it is rewarding in itself to create and maintain such a list, as long as it doesn’t become stressful. At various stages of my List’s development I have found myself trying to implement something far too complicated for its own good – it may have seemed like a step forward at first, but a few days later the approach might already be gathering dust. Start simple and let it evolve.

As mentioned, forcing myself to complete an hour of a particular task when I couldn’t really be bothered would only keep something as a chore, and even the satisfaction of completing that task wouldn’t make up for the miserableness I would have inflicted on myself. I have come to suspect that fatigue is a big part of this; I may not be expecting too much of myself for a particular task that is causing me stress (although the feeling of stress may maybe me think otherwise), but I may have overdone something else, such as cycling. Therefore, I think it maybe more about not overdoing an activity we enjoy, rather than trying to spend more time than we’re happy with for something that is deemed to be a chore. Therefore, I currently prescribe a 1 hour limit to most tasks unless they demand otherwise (such as the time I’ve spend writing this topic!) Perhaps this is counter to the concept of “being in the flow” or losing yourself in a particular activity such as reading a great book or writing a blog post, but I’m hoping it enables me to find a balanced enjoyment in and appreciation for all aspects of my life; not so much up and down or burning myself out.

This approach seems to be helping me to maintain my focus on mentally challenging tasks such as learning German.

Bear in mind that “Time” here is a human construct that we don’t always work well with. In some ways it is the energy or effort that we put into something that we want to compare, which is not always so easy to do. Would an hour on a treadmill involve as much effort as an hour spent writing, for example? It depends on you.

As always, my To Do lists are flexible, as you should allow yours to be also. Everyone’s days are different, and everyone has different aims, hobbies and interests in life (and commitments). Over on Dr Martina Feyzrakhmanova’s blog she mentioned how she reviews her efforts and experiences each day, taking into account, and appreciating also, those random things that crop up, highlighting the two.

I also review my efforts, not only by keeping a record of some things on the To Do list itself, but also by keeping a journal and maintaining some other records (although one can over-do this). I think it’s very important to be mindful of what things have have influenced, blessed, or heaven forbid hindered our days; It’s important to be flexible and I will add that I have tried to implement a daily schedule that ran like clockwork, but that failed very quickly.

As I’ve come to learn though, any such lists as New Year Resolutions have to be achievable, and not just a list of wishes; you have to work at each thing on that list, and you have to become those things, this is where my monthly To Do lists come in. This is because you might have to break something down into manageable steps or implement micro-targets along the way to keep you on track, something I’ve come to appreciate more recently, but you also have to think about where you will be once you “achieve that thing”. Really though, you have to treat those steps or micro-targets as stepping stones, but not always towards achieving that thing, but becoming that thing. The resulting success might not be quickly apparent; sometimes you can see your progress in something by the end of a week, but maybe it will take longer, not only a month, or a year, but a lifetime. This is why it is important to consider WHAT YOU WANT TO BE, not necessarily what you want to be doing.

I’ll not go into details here about each of my “New Year Resolutions”, although you will have read of mention of some of the features since you’ve got this far! I may well save the details either for a specific future post, or let mention of them find their way into future random topics as I’m sure they will be liable to do so, and to be honest, I’ve not finished my actual list because I’ve been too busy pursuing this process of implementing them!