In addition to the letter and things I sent to Unilever recently (see my previous post), I also had reason to write to a local supermarket I frequent, and my local council, both about recycling. What can I say, I was on a roll?

The supermarket one came about because they have a sort of membership scheme thing going on, which I paid £1 to enter, which effectively makes me a shareholder and therefore eligible to receive details about AGM goings on, for which they sent me an e-mail little over a month ago. One of the topics was Recycling and it was pleasing to learn that over “99% of members who voted supported their aim to make 100% of their packaging easy to recycle, with a target of 80% by 2020.”

While I made the point of praising them on this I did point out that while their target of 80% is admirable, their aim of 100%, will not be an achievable target until they do something more about the rampant use of plastic film that plagues food; something I have brought up before. In similar form to my Unilever Freepost return I took the liberty of sending the supermarket office some of my recent packaging by way of example.

Around the same time my local recycling service issued, out of the blue, a set of new recycling boxes and a trolley contraption for them. I was a little disgruntled about this because it was only 6 months since they had gone about issuing half the residents with a new third box (for which I was one), and the other half the three on the trolley; I assumed that was the last of that change, but it turned out not: they were planning on giving the rest of us a trolley and three new boxes eventually too. It seemed a waste that they had given us the single new box which was now not needed, indeed we are still stuck with out old boxes which are perfectly usable. 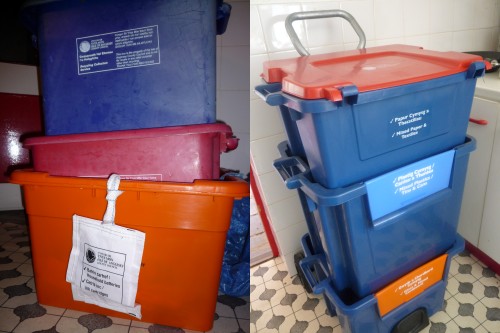