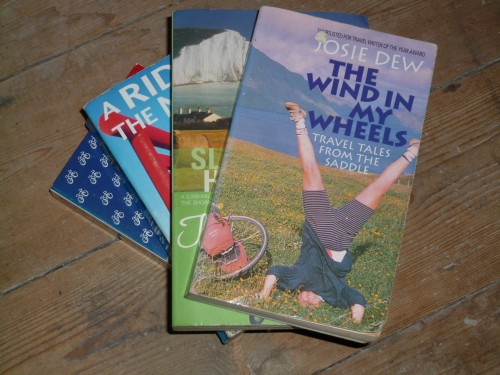 I was given three books by Josie Dew; of her travels and tales as a cycle tourer. The reason I was given them was because of my own recent bicycle adventure and I can relate to some of the various experiences Josie has experienced.

One theme that has cropped up a few times within less than 100 pages of Josie’s first book is the absurdity of the world that we observe. Some of us are capable of seeing such absurdities, or at least some of them, in our day-to-day lives, but there is something about touring by bicycle that seems to reveal things particularly vividly (I’m sure it’s not the only way). Here is one of Josie Dew’s observances of the absurd from page 56 of her first book ‘The wind in my wheels’:

Marseilles! Apart from the prices, it was paradise – and a welcome relief that we were no longer the centre of attention; we blended with the crowds instead of sticking out like a sore thumb. But what a shock to the system! A few days earlier we had been cycling amongst camels and carts and discreetly-robed bodies. Now it was flashy cars and fleshy buttock-revealing swimwear.

Everywhere oozed money. Scenes that used to seem normal I now saw with different eyes. It all struck me as obscene and yet I knew I was part of it. This monetary world was my world, the familiar world. The African world across the water was an alien one but I had tasted it and felt it and the contrast between the two made me distinctly unsettled…

Then there was the swanky high street lined with posh coffee shops that screamed “Money!” yet the road surface was the worst I’d seen anywhere; pothole after pot hole. How absurd!

I can’t recall where I heard it, but recently on a Youtube video I believe the speaker talked about how ‘we’ go off during out 9-5 job to find out coffee fix during our breaks, because our jobs alone don’t fuel us with enough enthusiasm. I guess this is the absurdity that is coffee and how we use and abuse stimulants to pull us through out mundane lives… and I like coffee.

When I read through Josie Dew’s absurd observances, such as passing through African dessert along side camel caravans to later on being among flashy cars in a wealthy city, it made me ponder what absurdities I witness in my own life.

Generally we blindly live among such absurdities to such a degree that they are our own absurdities, and we fail to realise this. It’s not until we step (or ride) outside the box that we are able to see them.

A first absurdity to come to mind is television, but in particular children’s television. I remember when I used to watch television as a child, but thankfully I was limited to only an hour or two a day and when I was old enough to choose for myself what to watch (or rather, choose with my brothers and sister) I had to be careful about my decision otherwise I’d miss particular programs I enjoyed; there was no case of leaving the TV on in our house for (mindless) background noise. But now when I observe television and how it is switched on (or “tuned to”) for the “entertainment” of a youngster (i.e. to keep them quiet/happy/out of mischief for a while) I see and hear the goings-on from an outside perspective; the programs seem alien, even mind-numbing, and scarily so. I haven’t watched TV as such for over two years and before then I was still in the habit of carefully choosing that I wanted to watch, never leaving a TV on in the background. Just this week I witnessed the seemingly endless barrage of colours and pointless sing-song; everything was animated and this went as far as seeming sinister to me. There was a segment that was about singing happy birthday to one of the viewers; I remember such segments when I was a child, but what happened way back then was the parents would send in a hand-made birthday card and it would get read out (by a person) to everyone: “Happy birthday to Denis today who is 3 and his mummy, daddy, grandma and grandad, and cat Steven all wish him a happy day….” Now, on this show it was some bright and colourful computer-animated cartoon world with over-sized insects on the screen, and the child who’s birthday was had his head transplanted onto a cartoon baby and was dancing on the screen. It scared me to think “Babies and very young children are being subjected to this every day – how the hell do they form a healthy grasp on reality?”

I could blame TV stations and program-makers for providing it, but “it’s what they and the others do” it has probably been seen as “the way forward.”I could blame parents for this, for sitting their kids in front of it, but “it’s what parents do.” They were probably brought up on an early incarnation of this stuff and then as each generation gives rise to a new generation each stage and permutation becomes the norm, and before we know it, we’re all living in an absurd and fake reality.

Another observance of the absurdity as related my Josie is one of supermarkets and Western-style shopping habits, here is what she tells on page 75:

High up in the eastern Pyrenees, we ventured into the tiny semi-autonomous republic of Andorra. Situated in a beautiful valley among spectacular mountain peaks, the ancient capital Andorra la Vella is incongruously surrounded by a hideous array of duty-free supermarkets. It has merged with the neighbouring and larger town of Escaldes to form one gigantic zonal shopping centre.

Tourism has had fundamental social and economic consequences here. About six-million tourists (mainly French and Spanish) flock to this shopper’s paradise each year. A constant stream of cars descends upon the narrow streets, which are lined with ugly displays of hi-fi and electrical shops. Into these gadgetry oases pile floods of hungry-eyed bargain hunters. Laden with booty, they crowd into the hotels and restaurants to refuel on an abundance of absurdly cheap alcohol. Then, fuddle-headed, they sway back to their vehicles to join the queue for absurdly cheap petrol before joining the queue to leave. We passed an endless traffic jam as we freewheeled down the mountains into Spain.

Even the quieter shopping complexes I visit for my weekly shop reveal absurdities to me. The majority of aisles have ‘food’ products that are almost alien to me; freezer aisles with row upon row of stuff clad in plastic and cardboard – I keep away from such ‘nourishment’ particularly because I don’t have a freezer of my own.

Then there is the absurdity of plastic, and and absurdity of Brexit; how a news reader on the radio recently, when reaching the section about the state of the world markets, can say how “Sterling is down against the Euro, due to Brexit…” followed by, and almost in the same breath “…Marketing is up in the UK…” also due to “Brexit”.

I wonder what other absurdities I can discover today.