“You know when you’re doing something right because… the universe tells you.”

That was pretty much what I observed during my first High Point adventure, which was confusingly #2 on my list of Angelsey High points, when I was blessed with the view of a sea of snowdrops at the foot of the climb I was heading towards.

Then today I headed off to High Point #3 – Mynydd (Mount) Llanelian, whose summit is at 177 metres (581 ft). The destination of this route would consist of two peaks, the first one known locally as Nebo Hill, which I don’t particularly like, and then I would head down into Porth (Port) Llanelian, before turning round and heading back up and out of it, which makes for a steep climb too.

Heading down the other side of Nebo Hill was fun, and reaching point (1) on my map provided views down to where I was heading, Porth Eilian, and Point Lynas Lighthouse.

Heading down the hill-side further did require me to take it steady somewhat. These are narrow winding roads, only wide enough for a single four-wheeled vehicle, which I didn’t want to meet at speed, and I had to keep to the left (here we ride/drive on the left) to avoid putting my wheels on the loose grit that lined the centre of the road – gripping the front break a little too sharply on left-hand bends here caused me to under-rotate the front wheel slightly a couple of times… i.e. lock up, and thus drift out wider still. Then the road opened up and became nice and smooth before arriving at Llanelian proper, then down into the bay.

This is the second time I have cycled down into this small bay, and it really is a treat – the first time I had no idea what was in store for my eyes. Today was little different and the the green shades of the water, a rare sight for me, were striking today.

A woman and her dog were just heading towards me off the beach a few moments after I had stopped. I could see the dog had been for a nice play in the sea, and I was somehow expecting what followed…. Shake!!

That happened quite close to me too, and I chuckled as my bike received a few speckles of sea water, before he was coaxed away up the road with the aid of a ball.

I walked my bike down and leaned it against a low wall. I took some pictures and sat down to make some notes.

Then the universe presented me again with confirmation I was indeed doing something right in my life: a robin joined me on the wall to my left, a little over a foot away next to my bike.

I calmly glanced at it and enjoyed the brave presence. Then as I glanced out to sea I sensed it hop behind me, before appearing on my right, again sitting only 1-2 feet away. I tentatively took my phone to my hand and switched it on (no signal, lol) sadly my better camera was too far away in my panniers at the opposite end of my bike. Nonetheless, I turned on my phone’s camera and gingerly aimed it towards the little creature, who seemed to be far from camera shy – I knew my phone’s camera was poor but if anything I wanted a little keepsake to depict how close this little fella was. How clear the pictures turned out illustrate how close he was since any pictures taken on my phone are usually hopeless. 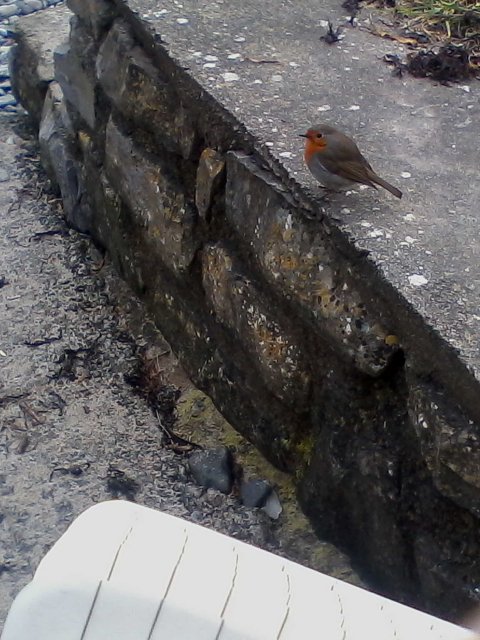 After taking a few snaps and quietly walked over to my panniers and fumbled around inside for my other cameras. I’ve been dabbling with a film camera and I unpacked this, by which time the robin had joined me again, now to my right as I faced the wall. I fiddled with the dials on the mechanical camera, positioned it low to the wall and reeled off a couple of shots – how these turn out we will all have to be patient to find out! I returned to my sea, now with my digital camera in hand, but the robin had now joined him mate some distance away – posing for her was of more interest now than posing for me.

I would have quite enjoyed a little snack and coffee at this point, but I hadn’t considered this before I had set off, and my next stop was indeed the shops for some milk, so I calmly and contentedly climbed back up the hill on my bike – not too much of a bother for my legs, perhaps my mind was still distracted.