Back in January [2016] my brother gave me a second-hand bread machine (I think that makes it technically 3rd hand, but he never used it, so perhaps not). The problem was, it lacked a user manual [although I have since obtained a copy].

I quite liked the idea of baking my bread and the thought of “all that kneading” and complicated baking when making a loaf by hand (which I’ve never attempted but I remember my dad trying many years ago) seemed like like too much of a faff… a bread machine would be ideal, especially a free one. I did still consider though; would it be worth it?

When I buy bread I usually grab what’s on offer/reduced at the supermarket; I avoid plain white loaves, preferring wholemeal bread, and if there is a reduced-price seeded loaf for about a quid (£1) or less, then I’m pretty happy. Taking into consideration the cost of ingredients and the running/electricity costs for a bread machine, would it be worth it?

I looked on the base of the machine and it had wattage ratings for both the motor and the oven components, I then looked at how long each were in operation based on the cycle my desired loaf would go through (according to the manual I found online) and decided its use could indeed be justified. To ensure maximum efficiency I would only make the largest size loaf (the options being Medium, Large or X Large).

I looked at the cost of basic ingredients and got a rough idea about the cost per loaf.

From the onset I determined that to make a similar loaf to that which I would normally buy, using the bread machine could be justified – I wouldn’t make a saving perhaps (which wasn’t something I was particularly aiming for) but it wouldn’t cost significantly more. For my first loaf I monitored my electricity usage and determined my loaf baking could still be justified. All roughly worked out on paper, providing I didn’t have to switch to “higher quality ingredients” (i.e more expensive ones) to make the loafs work.

I also considered what packaging I would be buying when baking my own loafs. When buying a ready-made loaf from the supermarket the only packaging is the plastic bag which can be recycled with carrier bags, and the small plastic sticky-tag to keep it closed, but for baking bread with the bread machine there was a list of separate ingredients, all packaged in a variety of ways. Based on what I would normally/typically buy here is the list:

As you can see, there is a fair amount of plastic, some of which isn’t recyclable, namely the dried milk powder and yeast sachets, vs the one simple, and recyclable, plastic bag a typical supermarket loaf is supplied in – not so good – but typically one small sachet per loaf and a small portion of the other plastic… maybe I could live with that: The loaf would surely be better quality, certainly fresh (not that that particularly bothers me) and more wholesome I’m sure (something I’m particularly conscious of regarding mass-produced food) – I could potentially be eating less bread for the same number of calories and amount of carbohydrates, which seems like a big plus to me.

The main issue from the onset was the lack of manual. I looked online for a manual, but the closest I could find was one for another bread machine and although very similar the menu options didn’t quite correspond correctly – no matter, I thought, I would just pick the type of loaf I want from the list of recipes and set the machine onto the same type of loaf.

I came across lots of people looking for the manual for this bread machine and others – it’s a shame that manufactures all but render their appliances by not providing copies of manuals for their obsolete appliances freely (surely contributing to the unnecessary disposal of such things while they are still functioning). There also seemed to be a great lack of websites dedicated to providing receipts specifically for bread machines – as I learned, it seemed that receipts for loafs that are made by hand are a great deal more simple, although loading a bread machine is straightforward and there is next-to-no cleaning at the end.

On the first, and each of the following (many) attempts the loafs were loafs, and edible, but not perfect. Namely the top would be flat, the loaf quite heavy, and the consistency not consistent throughout – the lower portion being more compact compared to the top.

With each loaf and attempt I would look online for solution to each problem and modify the quantities of particular ingredients to try and see what improvement, if any, that made. Actually, for my first loaf my first issue was that I had no proper “tablespoon” or “tea spoon” measuring spoons for which to measure out the ingredients in the quantities stipulated in the recipes, but then when I did get such spoons my X Large loaf ended up rising too much for the bread machine – which was always quite amusing to see!

When the loafs were too big I tried first to use the quantities for the Large size loaf but still set the machine to the X Large setting, but this seemed to over-bake the bread, giving it a thicker crust. So, when this happened I calculated my own quantities to be somewhere between the two extremes, and this worked best.

Some loafs would end up rising whilst baking, but then the top would sink at the end and the loaf would end up with a flat top.

Often the consistency remained poor throughout.

After my first loaf I kept having a problem with some of the flour not being mixed into the loaf and ending up in the corner. Then I realised the cause of this: I had moved the bread machine to an uneven surface after the first load – make sure your work top is level.

Once I had run out of variations I could try/had all but given up and resigned myself to eating defective loafs, and in some cased become less edible, I decided to take a step back. I was trying to make a wholemeal loaf, which seemed to have more potential to go wrong than a simple plain white loaf, so I decided I would make a plain white loaf instead, see how that turned out, perfect that first (ideally) and then modify that recipe to include wholemeal flour (typically the wholemeal loaf uses close to 50/50).

The first while loaf I made rose too much for the bread machine – probably the biggest one I made and nudging the observation window. I then scaled back the quantities to mid-way between the X Large and Large, knowing from my previous experiments that going to the Large but leaving the machine on X Large would result in the crust being too thick.

The result was good – the size was perfect for the bread machine. The loaf, other than its size, seemed perfect from the outside. But then I started to cut my first sliced. At first they looked good, but as I sliced in further and further in, things began to fall apart, literally. The bread was too soft and fluffy inside and my slices ended up with holes in the middle (making for somewhat messy sandwiches).

I went back online to look for a solution to this problem. One suggestion was to use a little less yeast, and another was to add some wholemeal flour – so now was my moment to make that step back towards wholemeal bread.

From the recipes in the manual the key difference between the two (aside from white being all white flour) was that the white loaf used margarine instead of oil. It also used less water, slightly more dried milk powder, and more yeast.

I went with the suggestion: I kept to the white loaf recipe, simply swapping half the white flour for wholemeal.

A few hours later a perfectly-sized loaf was removed from the machine, and the next day I tentatively sliced my way into the loaf…

Pretty much perfect (in my opinion)! Yay! 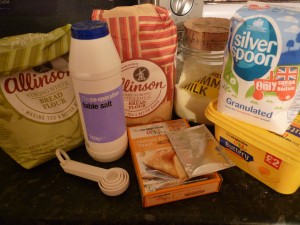 Here is my X Large Wholemeal Loaf recipe – the machine should be set to X Large White Loaf (ingredients should be loaded in order and scattered evenly):

If you want to make a white loaf instead just use 790g of strong white bread flour (and no whole wheat bread flour) and perhaps use only 7ml of yeast.

Different brands of ingredients will have a bearing on how your loaf turns out.

Here is an alternative loaf video I made: